My Talks and Seminars

I consider academics very seriously and dedicate significant portion of my time on preparing presentations and seminars on my academic work. From my 1st year of Undergraduate Engineering, I have given several talks at a local amateur astronomy club in Pune called ‘Akashmitra‘ (which means friends of the sky in the local language – Marathi). At Akashmitra, like minded people interested in astronomy come together for academic discussions on astronomy. Along with these talks, I also receive several invitations to give talks at colleges in the city based on my project work and experience.

2. Lecture on “Astronomy for Engineering Undergrads” at the College of Engineering in Pune.

4. Invited talk at the Orchid School in Pune for their monthly science series “Science Beyond Science” on the topic “Physics in Astronomy” for high school students. 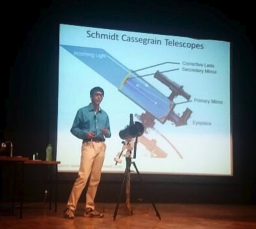 5. Presentation of Observations of Pulsars at Ooty Radio Telescope on December 31st 2016. 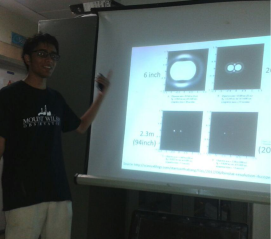