When I do have free time I spend it on Public Outreach i.e. taking Science or Astronomy to the general public. Doing so, makes me better at my understanding of the subject and also gives a sense of satisfaction of taking this knowledge to the masses.

I do conduct sky observing sessions for people such as showing the Moon and planets through a telescope, mobile-planetarium shows or even night long sky gazing shows away from the city with amateur astronomy enthusiasts in Pune.

As an amateur astronomy enthusiast I grew up looking at seniors and people mainly from a group of amateurs called “Akashmitra” in Pune. Although most of them are currently not in Pune (many are out of India) I did learn a lot of astronomy under them. From 2014- early 2016, I have given about 14 talks in this group on astronomical topics and I have also been a part of their public outreach activities.

This page would highlight my public outreach ventures. 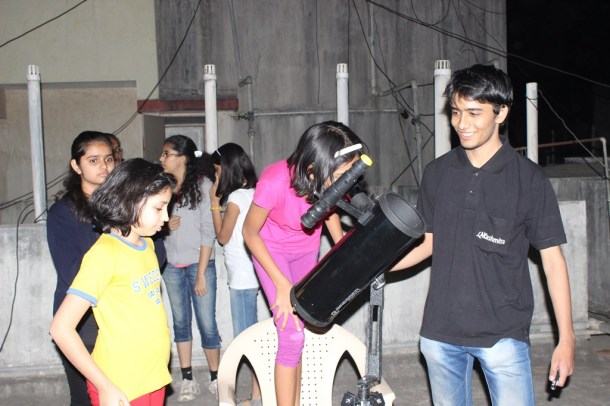 4. Volunteering at National Science Day at IUCAA on February 28th 2015 and presenting a poster on Digital Astrophotography:

5. Giving a guest lecture to my juniors from the Loyola High School in Pune on how to build a rain gauge and measure rainfall with it. August 24th 2016.